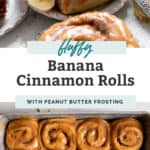 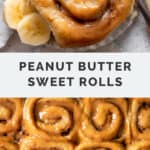 Safe to say I am fully obsessed with all things banana. Add in peanut butter and I am SOLD. I love this combination so much it was one of our wedding cake flavors, which I recreated here!

If you’re anything like me, I think you’re really going to love these banana and peanut butter cinnamon rolls!

We’re actually taking my very popular banana cinnamon roll dough recipe, adding some peanut butter into the filling and using a peanut butter glaze. Trust me, the result is epic!

For the dough you’ll need:

The icing is a delicious peanut butter glaze made with powdered sugar, creamy peanut butter, vanilla extract and milk.

If you’re new to making cinnamon rolls, it’s best to read through the ingredients and recipe first before getting started, so you get a general idea of how everything comes together.

Then gather your ingredients and equipment, measure everything out and begin, step-by-step.

I totally understand working with yeast can seem daunting, but this recipe and this step-by-step process is fool-proof!

To start the dough you’ll proof the yeast. This is done by warming the milk to about 110ºF and pouring over the yeast and sugar – let it sit till foamy (the picture below) and that way you know your yeast has activated. If it doesn’t get foamy after 10 minutes, your yeast may be bad or your milk may have been too hot and you’ll have to start over.

Once your yeast is foamy, you can begin adding in the melted butter and mashed banana, then the flour – about 1 cup at a time) and salt.

With the mixer running, slowly add enough flour until the dough starts to look elastic and it pulls away from the edges of the bowl (should be about 3.5 cups worth). Then change the attachment to the dough hook and begin kneading the dough for five minutes, slowly adding more flour, about another 1/2 cup. You can watch a video of this process in this post.

Once your dough has been kneaded, lightly oil a large glass bowl and place the dough in the bowl, cover with a towel and transfer to a warm environment. Let the dough rise until it’s doubled in size, this usually takes about 45 minutes.

If you live in a cold environment, preheat the oven to 170ºF, then turn off once it reaches temperature. I do this at the start of the recipe, as the yeast is proofing.

Rolling out & Add the Filling

Now it’s time for the fun part! Rolling out the dough and adding the filling.

Place your dough on a lightly floured surface and use a wooden rolling pin to gently roll the dough into a 15×9″ rectangle – use measuring tape for accuracy.

Spread on softened butter, creamy peanut butter, brown sugar and cinnamon, going to the edges – gently pat down then add on sliced bananas.

Using the heels of your hands, gently roll up, placing the seam side down. Trim about 1″ off the ends. You can discard these are twist them up and bake them separately – more notes on this in the recipe card!

Slice the Rolls with Floss

The best way to cut cinnamon rolls is with floss! I swear by this method. It helps from smashing the rolls. But if you don’t have any floss, use a large serrated knife.

To cut cinnamon rolls with floss, shimmy the the floss under and pull up, then cross and pull down the floss into the rolls to cut.

Place the cinnamon rolls in your baking pan, leaving a little room for the rolls to rise.

We’re going to let the rolls rise slightly once more before fully baking, so place them in a warm environment for 15 minutes. If they were rising again using the warm oven tip, take the pan out while the oven preheats to 350ºF.

Once the oven has preheated and the rolls have risen, place in a preheated oven and bake for 18-20 minutes, until tops are lightly golden.

Okay, so this peanut butter glaze is so easy and the most perfect topping for these cinnamon rolls! It’s also vegan friendly (no cream cheese or cream cheese substitutes needed).

Just mix together creamy peanut butter, confectioners sugar, vanilla extract and milk of choice. Whisk together until smooth, then pour over the cinnamon rolls.

What to Expect for this Recipe

These cinnamon rolls are banana-y, thanks to banana in the dough and banana slices in the filling.

Hints of peanut butter and cinnamon-sugar goodness in the filling.

Complete with a peanut butter glaze to round it all out. 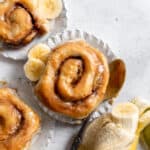 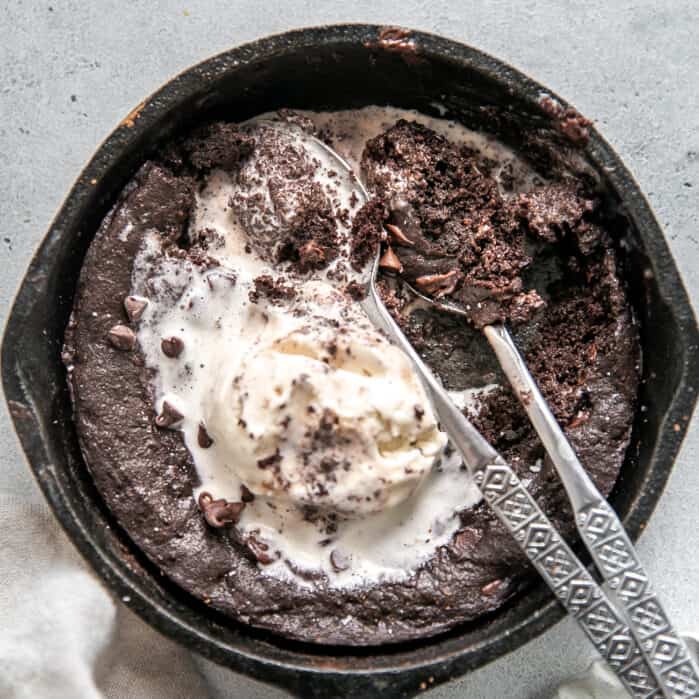 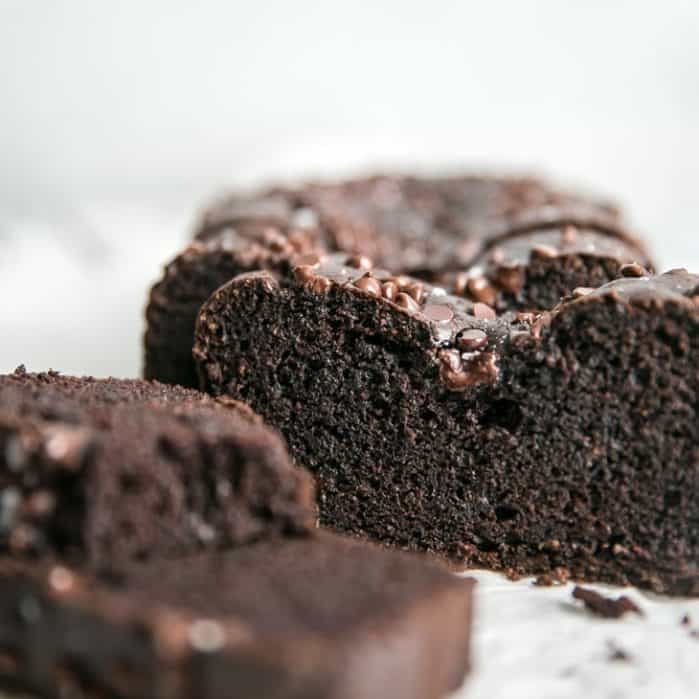