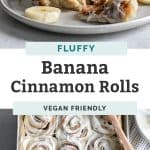 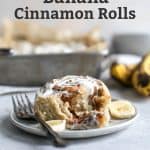 These fluffy banana cinnamon rolls are definitely the perfect brunch item for any occasion. Plenty of options to make dairy-free and vegan-friendly as well! No eggs needed in this recipe!

This post is sponsored in partnership with Bob’s Red Mill. Thank you for supporting the brands that help me bring you delicious new recipes! As always, all opinions expressed are my own.

THE CINNAMON ROLLS OF MY DREAMS.

I’m talking BANANA cinnamon rolls. Hopefully you’re banana-obsessed like me and on board with this. I’ve made these three times already and they’re almost too good to be true.

Even Mr. FMK really likes them and THAT my friends, is a big freaking deal. He prefers that I don’t “mess with” classic recipes such as cinnamon rolls. But with these he didn’t even seem to notice that I lightened things up a tad compared to a traditional cinnamon roll recipe. So let’s just keep that between us, mmk?

I’ve been dreaming up this cinnamon roll recipe for ages and it’s about dang time I bring you the recipe so you can understand just how delicious these guys really are.

I am forcing my banana loving ways on you in hopes that you’ll make this epic cinnamon roll recipe the next time your morning needs a special treat.

And I want to go through some steps for you so you can see just how simple baking cinnamon rolls really is.

Don’t be afraid of yeast, my friends!

If you haven’t made cinnamon rolls with bread flour you’re in for a real treat… IT’S SO FLUFFY <– Name that movie.

Bob’s Red Mill is my go-to for all of my flour baking needs – they product the highest quality products that you can always trust to give you the best baked goods ever.

And these cinnamon rolls with bread flour are no exception. They are AMAZING.

Then for this recipe you’ll then add the banana puree and melted butter, then stir in the flour (and touch of salt) about 1/2 cup at a time. The dough will start to come together around the 3 cup mark. You’ll know it’s time for the dough hook when the dough looks elastic and pulls away from the sides of the bowl.

TIP: Set the oven to 200ºF, turn off once it reaches temperature and let the dough rise in a greased bowl until it doubles in size – about 45 minutes.

Now it’s time to ROLL OUT. (Ludacris, anyone?)

Just be gentle as you roll the dough out into a large rectangle, about 15 inches long by 9 inches wide.

Then the filling goes on and you’ll roll up the rectangle into a long roll to slice the cinnamon rolls.

I like to trim off the ends a little bit and then cut into 12 slices.

If you’re looking to have fresh cinnamon rolls in the morning but don’t want to be up super early, you can prep the recipe up until you’ve sliced the dough and placed in the baking pan. Then you just cover and place in the fridge overnight. Bring the pan out of the fridge about an 45 minutes before pre-heating the oven. Then place the rolls in the preheated oven and bake for about 25-35 minutes.

These banana cinnamon rolls are:

This recipe is already egg-free and is vegan friendly using plant based butter and plant based cream cheese (i.e. Kite Hill, Miyoko’s, etc.)

Let me know if you try this recipe by leaving a comment and review on the blog – it helps other readers learn more about the recipe too! Xx Ashley 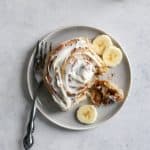 These fluffy banana cinnamon rolls are definitely the perfect brunch item for any occasion. A lightened up filling but full of flavor. An egg-free recipe and options to make vegan friendly with two simple ingredient swaps.

FLOUR: If you don’t have bread flour, you can sub unbleached all-purpose flour. Or whole wheat pastry flour, which will work but you’ll only need about 3.5 cups total, and your rolls will be more dense.

*Nutrition info approximate, does not include cream cheese frosting. This recipe adapted from my gingerbread cinnamon rolls. 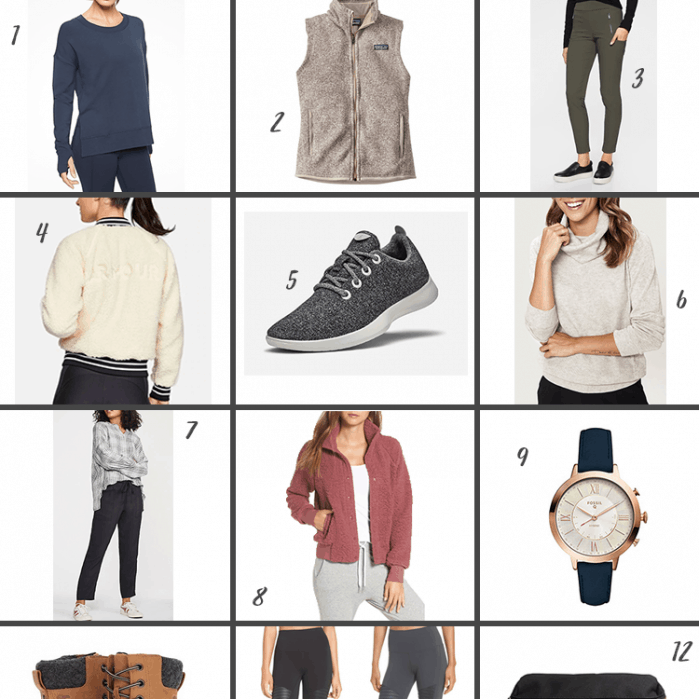 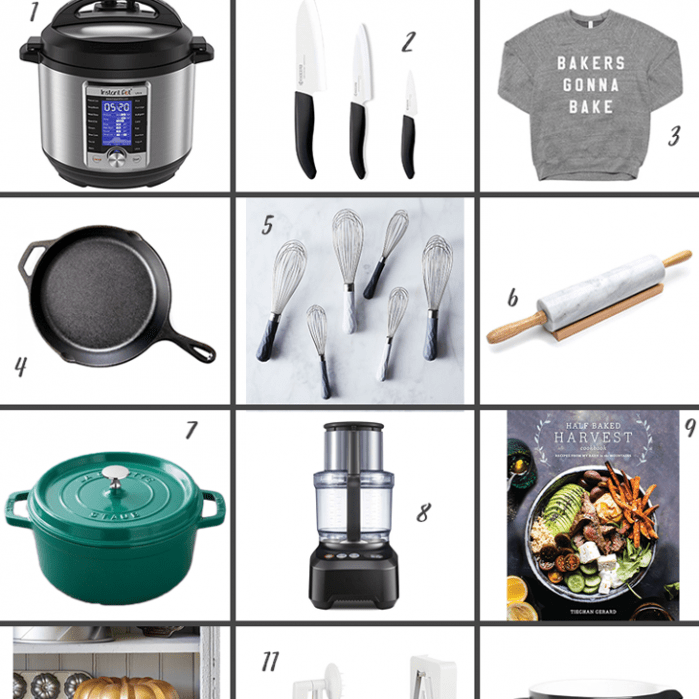