If you love cinnamon rolls and are a matcha latte drinker, well then you must make these. Vegan friendly recipe using plant based butter, no eggs needed.

If you love drinking a matcha latte and love cinnamon rolls, then this recipe is for you!

Why Use Matcha in Cinnamon Rolls?

Why not?! It’s a fun way to make a classic breakfast pastry a little green. If you have kids and their favorite color is green, or you want to show some St. Patrick’s Day spirit, make these!

Can you Taste the Matcha?

If you want to lessen the flavor of matcha, just use 2 1/2 teaspoons to get a decent green color.

I used a full 2 1/2 tablespoons and the matcha flavor isn’t super strong, but it’s there.

If you want really strong matcha, use 3 tablespoons.

Cinnamon rolls are not too difficult to make. While there are several steps involved, it’s truly not too complicated.

The first part of making cinnamon rolls is getting the dough ready.

First you’ll check your yeast by combining the instant yeast with warm milk and sugar. Let this sit for 10 minutes – it should get foamy and that means your yeast is active and you’ll get a good rise in the dough.

If your yeast did not get foamy, your yeast was either old you you may have killed it by using milk that was too hot.

After the yeast has activated, add in the melted butter, flour (a little bit at a time), matcha, and salt. Combine until dough starts to form then you’ll knead the dough with either the dough hook on your stand mixer or using floured hands on a floured surface.

Set the oven to 170ºF, turn off once it reaches temperature and allow the dough to rise in a lightly greased large bowl until it doubles in size – about 45 minutes.

On a lightly floured surface, gently roll out the dough into a rectangle, about 15 x 9 inches.

Roll up and Slice

Using the heels of your hands, gently roll the dough into a log, placing seam side down.

Using a serrated knife or floss, trim off the ends of the log (they don’t hold much filling).

Then continue slicing the rolls into about 1″ thick slices.

Place rolls evenly spaced out in a 9×9 pan or baking dish.

I spread mine out just a little bit so as you wait for the second rise, they don’t overcrowd each other.

Bake the rolls in a preheated oven at 350ºF for about 20-25 minutes, until the edges are are just slightly golden brown.

I went for simple glaze using just confectioners sugar and a little bit of non dairy milk. I didn’t want to take away the matcha flavor of the rolls, so I think simple is best here.

If you want a little matcha flavor boost, add 1/4 tsp of matcha powder in with the confectioners sugar for a green matcha glaze. 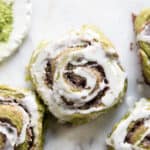 Overnight method: Prepare cinnamon rolls through step 4. Instead of letting the rolls rise again, you’ll cover them and place them in the fridge overnight. Allow rolls to come to room temperature for about 45 minutes to 1 hour before baking in a preheated oven at 350ºF. 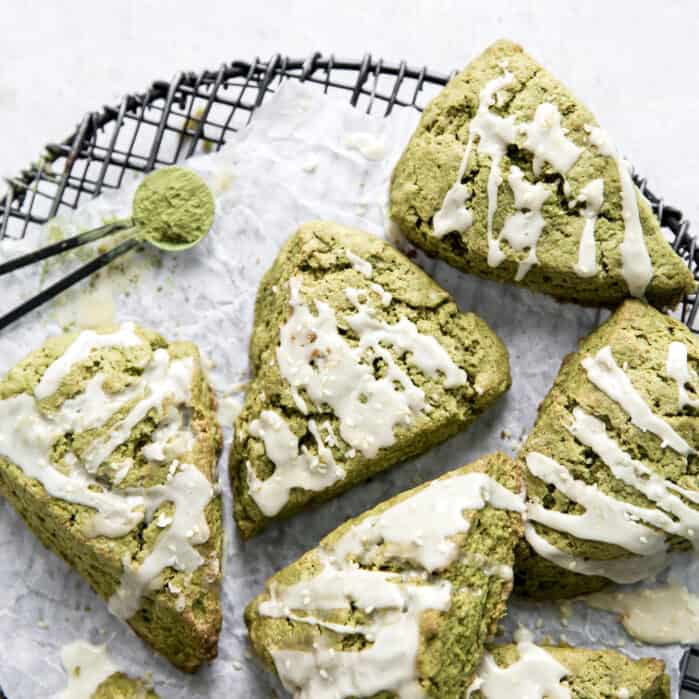 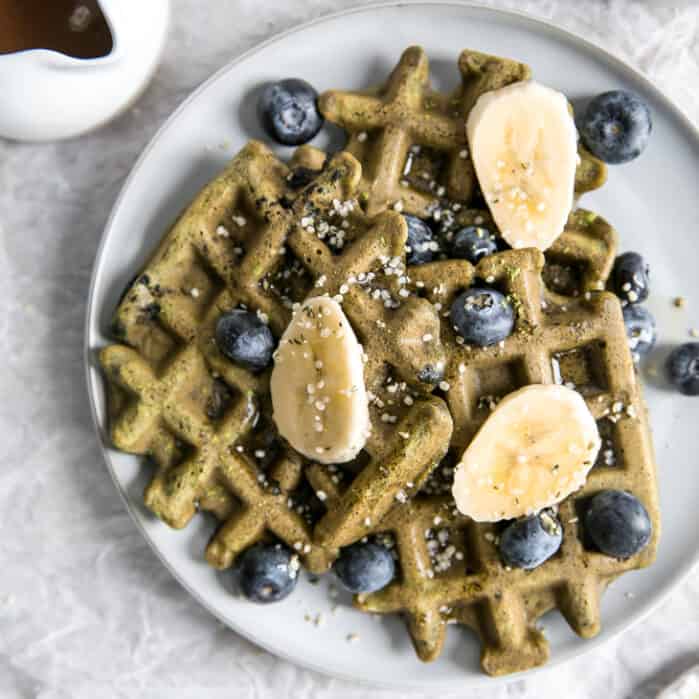