A healthy spin on a classic pie flavor: Gluten-free Banana Cream Pie Cookie Cups! Made with simple ingredients you can feel good about.

Can we have a mini house talk catchup? Okay, great.

So I actually feel like we are getting some rooms in our house together! YAY. We’ve got a couple of new dressers for the bedroom, and slowly but surely getting together the office. It has become a top priority lately, as it should considering up until Sunday I still had my Mac sitting on an old IKEA lack side table (yes, from college). I either sat in the computer chair hunched over, or cross-legged on the floor. My chiropractor would definitely not approve.

Of course we still have to repaint the living room… Yes, I said REPAINT. Not because of the color, but because I am clearly a painting newb and rushed through the second coat. It looks reminiscent of the old school sponge technique, but I used a gigantic sponge and went more subtle. Word to the wise – if you’re not good at painting walls, take the first coat and have someone else do the second 😀

Anyways, life still feels busy as ever and this July hasn’t slowed down one bit! I’m wondering if maybe we can slow things down with some banana cream pie?

I think banana cream pie is the perfect excuse to just relax, savor every creamy bite and soak in the summer. Although you might have guessed this isn’t your traditional banana cream pie. This version we’re making into healthy and simple cookie cups! And also sneaking in some collagen whey for a healthy protein boost.

When Vital Proteins came out with their new collagen whey flavor Banana Cinnamon, I was ecstatic. Which if you know me should come to no surprise because me and bananas are tight. When mixed in with frozen bananas for smoothies it legit tastes like a banana milkshake. OR if you just use frozen strawberries you get a strawberry banana milkshake 😀 I’m a little bit obsessed.

Not familiar with Vital Proteins? They are a collagen supplement company that provides various products using collagen that helps support overall health. You can read more about collagen in this post!

But let’s chat about these banana cream pie cookie cups

So I’ve actually never made a traditional banana cream pie before, but these cookie cups are much simpler and healthier than your traditional recipe. For starters, we’re not using instant pudding mix or cool whip or any of that other artificial stuff.

The cookie base is a slight adaptation from this recipe, except I added in some of the banana cinnamon whey.They’re grain-free, gluten-free and come together in just about 10 minutes! They’ll puff up a little once done baking but all you need to do is take the back of a round teaspoon and gently press into the cookie cups.

Some notes on the filling and coconut cream

Don’t feel like making whipping your own coconut cream? No worries – you could easily use a store-bought dairy-free coconut whip as well. Either way works, it just depends on how easy you’d prefer the recipe to be. Going this route will be quicker and have a little bit more added sugar.

I promise these are so much easier than seem! Just a few steps and some really simple ingredients come together for a healthy banana cream pie dessert that you can feel good about indulging in 🙂 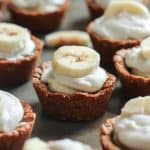 1. Preheat oven to 325F and generously grease a 24 cup mini muffin pan, set aside.
2. In a large bowl beat together nut/seed butter with coconut sugar until combined. Add egg, vanilla extract, cinnamon, baking soda and 1 scoop (20g) Vital Proteins Banana Cinnamon Collagen whey. Mix together on medium speed until fully combined. Mixture will feel thick and sticky, and slightly oily.
3. Scoop rounded 1/2 tablespoon of dough into well greased mini muffin pan and press down gently to fill the cavity. You should be able to fill all 24 cups. Bake for about 6-7 minutes. Dough will puff up slightly when baking. Remove pan from oven and using back of teaspoon, create indents into the cookie cups. Allow cups to cool in pan for 5-10 minutes before removing.
4. Make the coconut whipped cream: Place bowl in freezer for 10 minutes before whipping the chilled coconut cream. *Canned coconut milk should be chilled overnight to separate cream from liquid. The cream will be on the top. Do not shake can, and be careful when removing the cream from the liquid. If the cream has hardened to where it looks like there is oil on top, gently remove the hardened oil from from cream. Save the liquid for smoothies. In the bowl of an electric mixer with whisk attachment, whip the coconut cream on low speed for about 15 seconds. Add the Banana Cinnamon Collagen Whey and continue whipping the coconut cream on medium speed until light and fluffy. Add additional sweetener, about 1-2 TBS of honey or maple syrup if needed after taste testing.
5. Once the crust has cooled, add one banana slice into each cookie cup.
6. Next add about 1 tablespoon of whipped coconut cream on top of the banana slice, then top with another banana slice
7. Transfer pan to fridge until ready to serve. Enjoy Banana Cream Pie Cookie Cups chilled, as coconut cream will melt at room temperature.

Cookies may be made one day in advance. Cover tightly, storing at room temperature or in fridge for warmer climates.
*If using coconut whip, allow whip to thaw before whipping together with the banana cinnamon whey, using electric mixer.
Banana Cream Pie Cookie Cups are best enjoyed fresh, store leftovers in freezer for longer periods of time, and allow to thaw before serving.

This post contains affiliate links. Purchasing products listed through the links comes at no extra charge to you, but I will receive a small commission. Thank you for supporting Fit Mitten Kitchen! 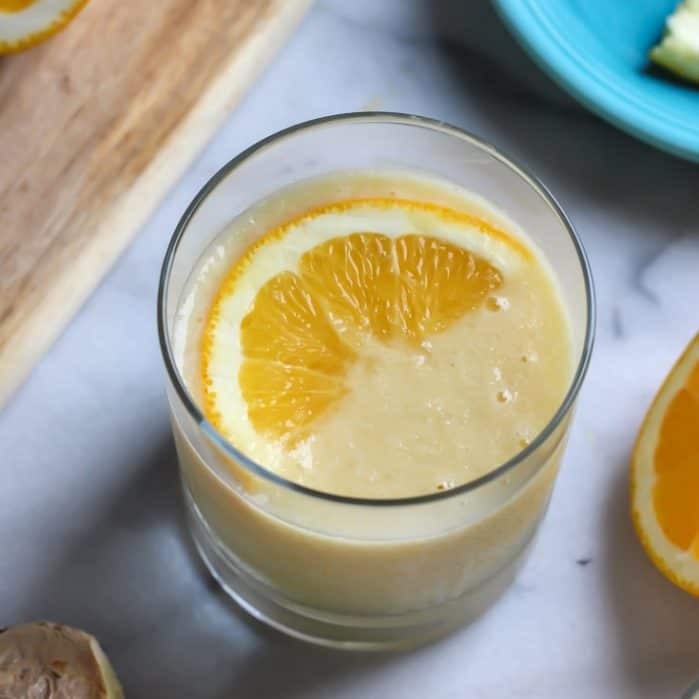