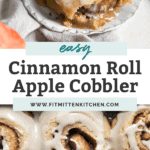 The best of both worlds in this delicious fall pastry : cinnamon rolls with apple pie filling!

Cinnamon roll lovers, this one’s for you.

Apple pie lovers, this is also for you.

Drew ate one of these and said,

“I think I just ate an apple pie bomb!”

Needless to say, he loved it.

So get ready for the most delicious fall treat because you’re going to want this on your baking list STAT.

This recipe is HEAVEN. It’s essentially like a cinnamon roll apple pie because you have your pie filling on the bottom and then the rolls baked on top.

It’s kind of brilliant, if I do say so myself.

Ingredients You Will Need

Whether you prefer coconut sugar, cane sugar, maple sugar, stevia, etc. this pie filling is made with YOU in mind.

How to Make Cinnamon Roll Cobbler

Start with proofing the yeast by combining the sugar with the yeast and warm milk. Let it sit for about 10 minutes, until the top is foamy.

If the milk mixture did not get foamy, your yeast is not active. So be sure to check the dates on your yeast.

Then you’ll add the rest of your dough ingredients – melted butter or coconut oil, flour and salt.

With the stand mixer running on low, add flour about 1/2 cup at a time. You will likely need about 2 1/2 cups or so. Dough should be elastic and start to pull away from edge of bowl when it is ready.

Now change the stand mixer attachment to the dough hook, and allow the hook to knead the dough on low speed for about 5 minutes. Dough should remain soft but not overly sticky – this is typically where I add about another 1/4 cup of flour with the mixer running, then stop the mixer once the flour has mixed in slightly, reposition the dough and start the mixer again until ball forms.

Note: if using all-purpose or bread flour, you may need a little more than 3 cups total.

TIP: Set the oven to 170ºF, turn off once it reaches temperature and let the dough rise in the lightly warmed oven until it has doubled in size, about 35 minutes.

Then it’s time to roll out the dough into a large rectangle, about 14 inches long by 9 inches wide.

Spread on softened butter, then sugar and cinnamon.

Roll up the dough into a log and begin slicing into 9 rolls, about 1 3/4″ thick. Ditch the ends since they’re typically small and don’t have as much filling.

TIP: Use the dental floss method to cut the cinnamon rolls by shimmy-ing the floss under the log, pull the floss together towards each other in the center and pull down until you’ve cut the roll.

Put pan in a draft-free environment for about 15-20 minutes.

Then bake the apple pie cinnamon roll cobbler in a preheated oven for about 20 minutes.

I went with a simple maple glaze for the icing, because I didn’t want a cream cheese frosting to overpower the apple pie filling and spices.

To make the glaze it’s just 2/3 cup powered sugar mixed with 1/2 tsp maple extract and one tablespoon of liquid – I typically use either a vanilla coffee creamer or whatever milk I have on hand.

You can’t go wrong with this delicious combo. 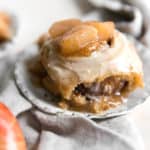 Feel free to use conventional butter if not dairy-free or vegan. 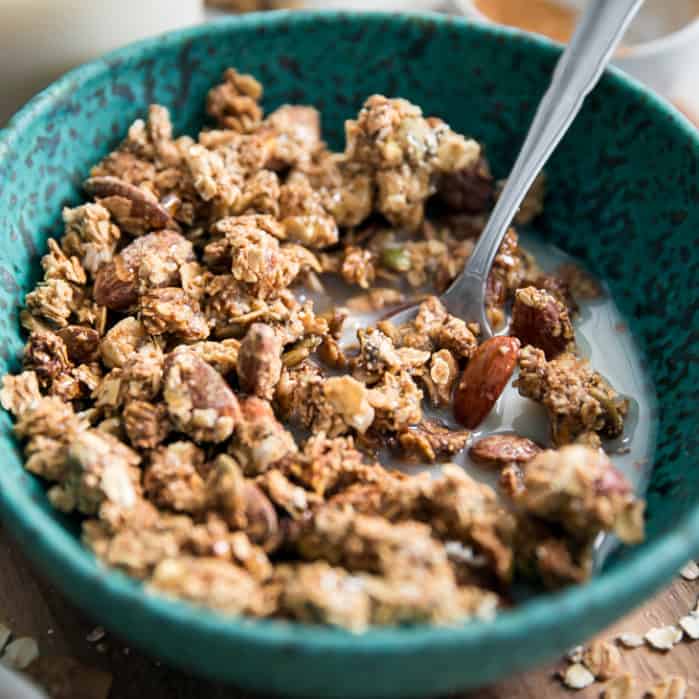 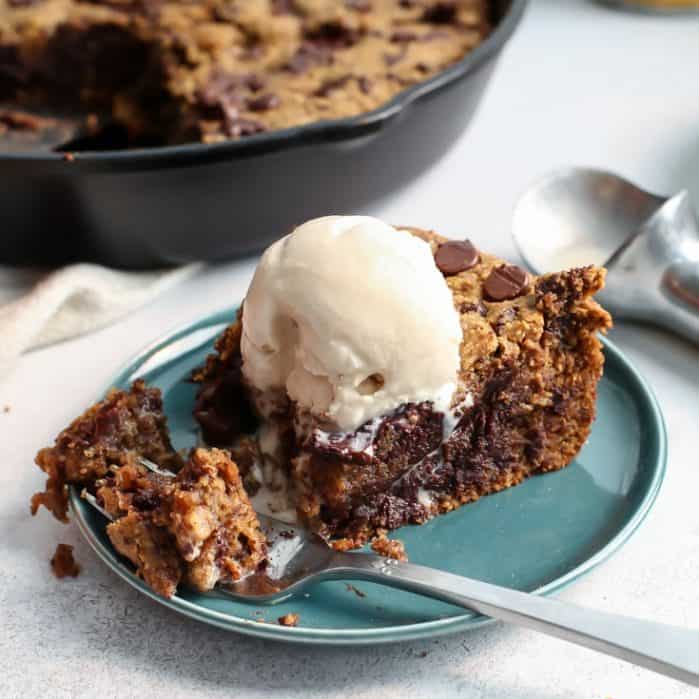